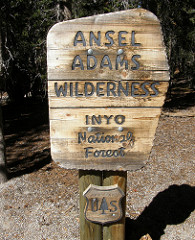 Wilderness is “an area where the earth and its community of life are untrammeled by man, where man himself is a visitor who does not remain…” It is “land retaining its primeval character and influence, without permanent improvements or human habitation, which is protected and managed so as to preserve its natural conditions”, as defined by the 1964 Wilderness Act*. This Act created the National Wilderness Preservation System (NWPS), which initially designated about 9 million acres of wilderness. The NWPS is now comprised of nearly 110 million acres of federally protected Wilderness areas.

Wilderness is an important designation by the federal government, but is also an idea and an ideology. It represents places where humans do not dominate the forces of nature, but rather, live within them, enjoy, respect, and learn from them. Wilderness protects many of our nation’s places with “ecological, geological, or other features of scientific, educational, scenic, or historical value.”* However, there is always the continuing struggle to protect more of these places.

Millions of Americans have fought for nearly a century for wilderness ideals; they have fought to protect the vast, beautiful, and great country in which we live, work, and play. Tens of thousands of groups have spawned out of the continuing need to protect these ideals, these places, and the intrinsic value that they have in our society. As of March 31, 2009, President Obama signed into legislation the Omnibus Public Land Management Act, which designated an additional 2 million acres to the NWPS. The Eastern Sierra has been blessed with 428,000 acres of this brand new Wilderness, as well as three new Wild and Scenic Rivers. These additions to the great American tradition of wilderness are warmly welcomed, and are due to the hard work of many over several years.

Wilderness is an important aspect of what we do here at Friends of the Inyo, but we will always need more help and appreciate your continuing support. Our nation’s wilderness areas will be around for many generations to come, but the ideals and the principles that they represent is something that we must continue to hold ourselves true to, as well as pass along to others.