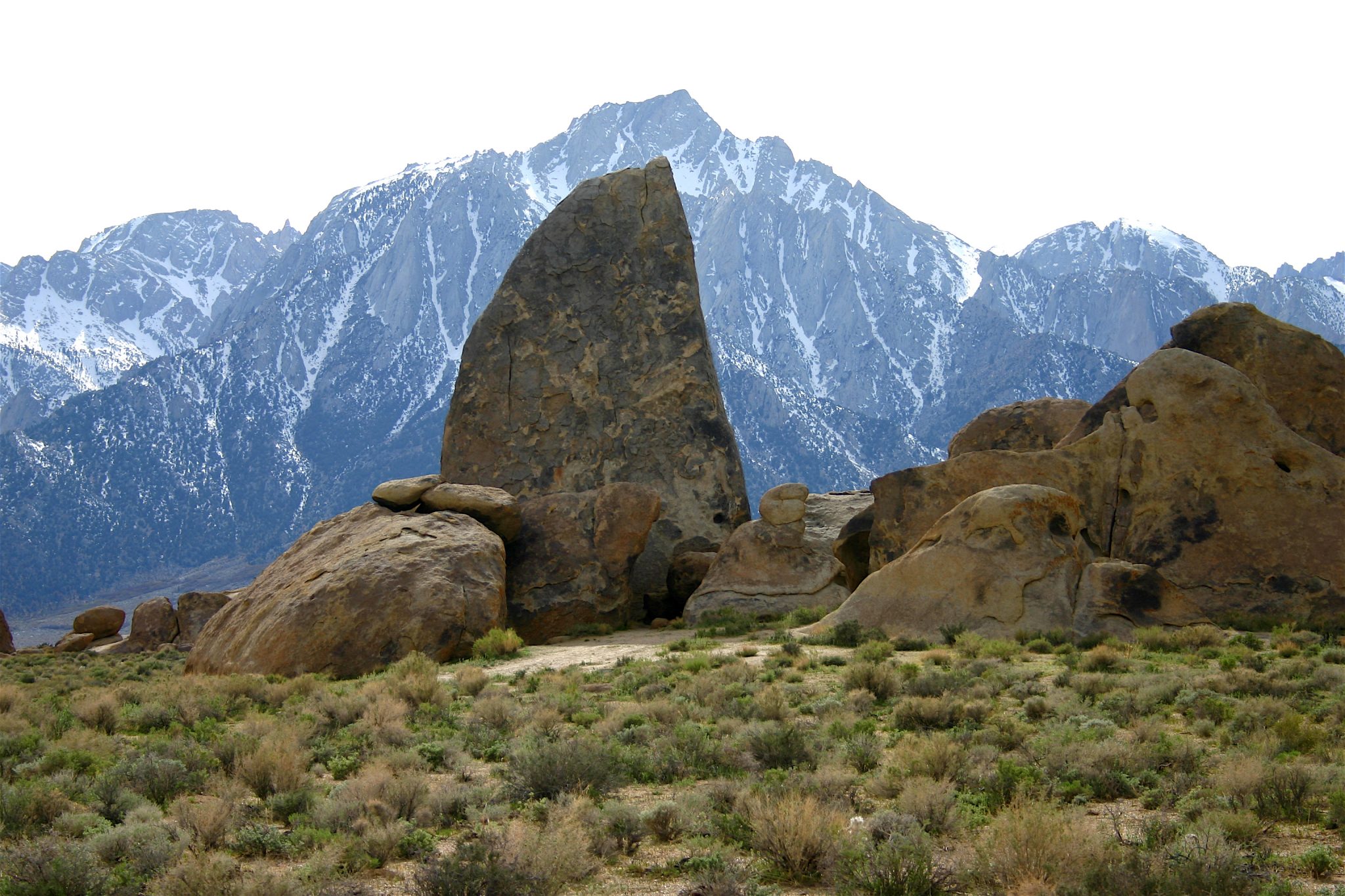 Visitors to the Alabama Hills near Lone Pine, California can find something of interest for almost every taste or inclination. If interested in geology, you can find the fault line along which one of the most powerful earthquakes in California happened on the night of March 26, 1872. It killed at least ten percent of the population and damaged or destroyed every adobe structure in Lone Pine.

The scarp is basically unchanged since 1872 because of the low annual rainfall. Turn right on an unmarked dirt road just after going west crossing the L.A. Aqueduct and travel until you are sitting on top of an area overlooking the Owens Valley. You are on top of the fault line and with careful searching you can find displaced irrigation ditches and even a creek bed north of the areas.

For hikers there is the brand new, as yet unnamed trail that climbs from near the Owens Valley floor to Whitney Portal at 8300 feet. You’ll be a robust pioneer if you make it the thirteen miles. There is a “grand canyon” as well that can be found with a little help from a member of the Alabama Hills Stewardship Group or experienced local resident.

Artists and photographers have long been drawn here. Ansel Adams did several famous photographs in the “rocks.” The most accessible is one he took with the point of a local rock formation called “Shark Fin” and matched it to the top of Lone Pine Peak. You can find the spot a few hundred feet down Movie Road. Famous landscape artist Maynard Dixon lived in Lone Pine for a year with his wife Dorothea Lange and captured the special light of the Alabamas in his paintings.

Perhaps most famous are the films of the Alabama Hills. Nearly 400 films, and more than a thousand commercials, have worked in the rocks. If you are interested, stop in the Museum of Western Film History, see the movie orientation film and some of the exhibits and pick up the self-guided tour of movie locations in the hills.  With luck and persistence, you can find lots of movie locations, including those from such recent films as Tremors, Iron Man, and most recently Django Unchained.

To get to the Alabama Hills, motor on down (or up) Highway 395. In the middle of Lone Pine you will find their only traffic light. Turn west and in about three miles turn north on Movie Road. You are now in the heart of Hollywood’s “favorite” movie location since 1920.

The Alabama Hills are in the shadow of Mt. Whitney, at almost 14,500 feet the tallest mountain in the 48 contiguous states. The Alabama rocks are geologically related to the Sierra but are a separate formation. One type of rock is metamorphosed volcanic rock and is 150 to 200 million years old. The other rocks are more prominent because of their varied rounded shapes with many indentations and arches. They date back 80 million years. The Mobius Arch is where the Movie Road turns suddenly east. It is well marked, has ample parking and only a ten-minute walk.

The movies also left a “faux” mining structure called an arastra. Follow the first dirt road that goes to right after turning onto Movie Road and eventually you will see a round structure of small boulders, with a wooden centerpiece. Once thought to have been built for the classic Gregory Peck western Yellow Sky, it is now realized it was there in West of Nevada filmed in a decade before.

The hills are rich with natural history, and spring usually brings lots of flowering cycles. It begins with scarlet milk-vetch, also known as scarlet locoweed, followed by desert paintbrush, then yellow desert daisies and apricot mallow, and finally desert asters and desert peach. Coyotes, ravens, jackrabbits, and even a rare black bear or mountain lion are encountered occasionally. Always step mindfully because there are some sidewinders and Mojave greens that make their homes among the rocks.

Finally, many find the Alabama Hills a peaceful, even spiritual place, good for healing and calming the nerves jangled by modern life. Spending a few hours doing nothing but listening, smelling, touching and breathing is a wonderful way to relate to the beauty of this area. Dawn and dusk are special times. The light is rare, the air pure, the shapes and shadows of the boulders fanciful. Finally, the wind picking up the smell of the sage is good for the soul.

Donate to the Friends of the Inyo!
Prev