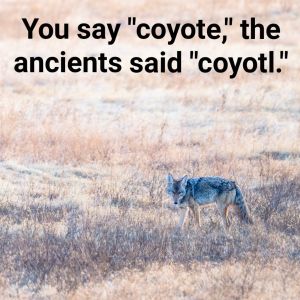 National Hispanic Heritage Month is observed from September 15 through October 15. Friends of the Inyo would like to celebrate with our community by sharing the meanings of just a few Spanish-language words that have made their way into English.

Today’s word is coyote. This word comes from the Nahuatl, which belongs to the Uto-Aztecan family of languages. Nahuatl is believed to have developed in Central Mexico and spread northward to the Southwestern United States, and Southward to Central America.

“Coyotl” is what the Nahua people called this animal, which is considered a “trickster” by various Native North American cultures.  Many Nahuatl words, including for animals, end in tl, which is one of the most common endings for nouns in that language. However, the tl  phoneme was difficult for the Spaniards to pronounce, so when they adopted Nahuatl words into their language, they changed the pronunciation to “te” (pronounced similar to “teh” in English). Other examples of  such Hispanicized words include the Nahuatl word for owl, “tecolotl,” which became “tecolote,” and turkey, “guajolotl,” which is still used in Mexico as “guajolote.”

Eventually, coyote made its way into English in the early 1800’s, and by the end of that century had pretty much been adopted into the language. Till then, other English names for everyone’s favorite trickster included prairie wolf,  brush wolf, little wolf, and American jackal. (Check out the entry for coyote on Wikipedia here.)

Stay tuned for more posts about nature and conservation terms that have made their way into English from the Spanish—whether they were Spanish to begin with or not—during Hispanic Heritage Month.