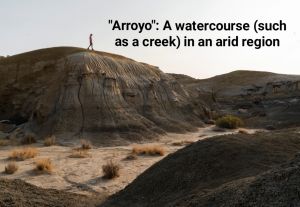 Even if you can’t trill your r’s, arroyo is a word you should know.

There is just one week left in this year’s National Hispanic Heritage Month, which is observed from September 15 through October 15. Friends of the Inyo has been celebrating with our community by sharing the meanings of just a few Spanish-language words in the nature and conservation arena that have made their way into English.

Today’s word is arroyo, which, according to Merriam-Webster Online, means a watercourse (such as a creek) in an arid region, or a water-carved gully or channel.

Wikipedia offers a more nuanced definition, which could be life-saving: also called a wash, an arroyo is a dry creek, stream bed or gulch that temporarily or seasonally fills and flows after sufficient rain. Flash floods are common in arroyos following thunderstorms.

Indeed, the best way to think of an arroyo is as a short watercourse, which is the main definition given to it by the Royal Spanish Academy. 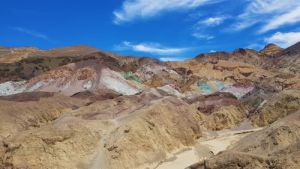 Friends of the Inyo’s Policy Director Jora Fogg tells us arroyos can be found in the White and Inyo Mountains. Operations and Philanthropy Director Michael Cleaver and Desert Policy Associate Bryan Hatchell tell us there are a number of examples of arroyos in Death Valley National Park, including one near the breathtaking Artists Palette (see photo at right).

Fun Fact from Bryan: Part of Star Wars – Episode IV – A New Hope  was filmed at that arroyo, which runs along the north side of the parking lot at Artists Palette. Read more about “Artoo’s Arroyo” on Flickr.

“Nerd Alert” from Michael: There is an arroyo in and to the east of Death Valley that hosts an entire ecosystem. The Amargosa River is mostly dry, but stretches of it run underground. The river emerges above ground (due to geological formations) at the town of Shoshone and Tecopa Hot Springs (see photo below), making wetlands that support one of the most endangered mammals in North America, the Amargosa Vole, which, according to Michael, is “super adorable.” They are so docile and chubby, Michael says, that  field scientists refer to them as “furry burritos.”  They are often snacks for the coyotes (check out our blogpost on the word coyote here) and birds passing through and were thought to be extinct until recently, he tells us. 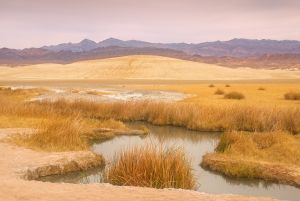 So there you have it: Lots of wonderful knowledge gleaned on this research trip whose starting point was just one word that made its way from the Spanish language into English: arroyo.

That is why diversity is important: It helps us learn…so much…from one another…together! Which is why FOI continues our Hispanic Heritage Month celebration. Stay tuned for one more post next week. Hasta luego!

Oh, and stay clear of arroyos in the rain!