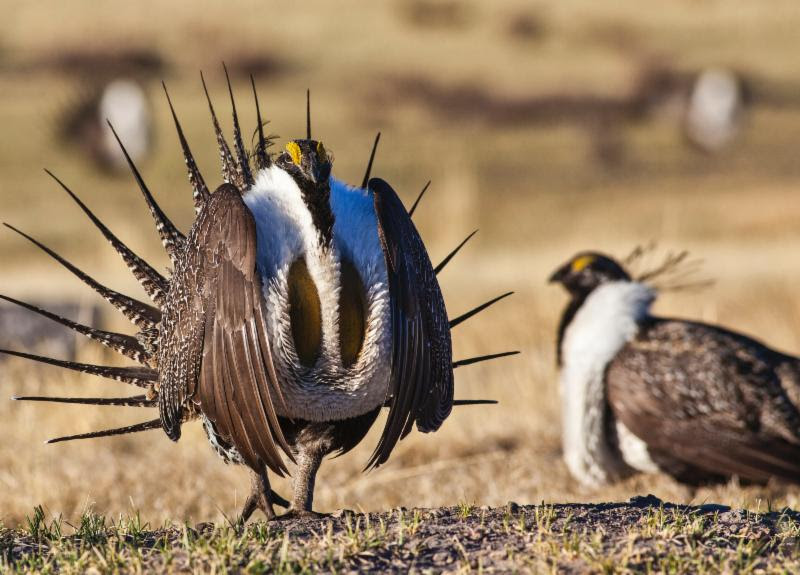 The US Fish and Wildlife Service (USFWS) announced their decision to withdrawal the Bi-State sage grouse from listing under the Endangered Species Act this week after nearly two years of review. The USFWS concluded that successful implementation of conservation actions and the future commitments of partners of the Bi-State Local Area Working Group are adequate to reducing threats to the bird. The Bi-State sage grouse is a geographically isolated and genetically distinct population of the Greater Sage Grouse. It was originally proposed for listing as threatened in 2013, with the USFWS withdrawing their proposal in 2015. In 2018 a federal court ruled required the agency to re-evaluate new science on the bird’s population numbers and threats. This recent decision by the Trump administration means the bird will not receive federal protections, leaving the bird’s fate up to voluntary conservation measures adopted by state and federal agencies as well as private landowners. Friends of the Inyo submitted comments on the listing in June of 2019.

***If the policy of decimating Pinyon Pine forests in order to “save” the Sage Grouse continues we will lose the Pinyon Jays as well.

We’ve Got To Fight For Their Right To Party

A group of jays is quite appropriately called a party. A group of Pinyon Jays is a big party – the kind of party the neighbors would call the cops on. I used to try and count them as they flew overhead but I would usually end up laughing and losing my place while the dog ran and hid beneath something. It rarely happens now. The Pinyon Jays are not around here much anymore.

There are still some Pinyon Pines scattered around my house and the homes of my neighbors but many of them were cut down or have succumbed to drought, insects and mistletoe. In the larger area of our watershed tens of thousands of acres of Pinyon/Juniper forest have burned in wildfires. The remaining Pinyon/Juniper forests in this region have been subjected to “thinning” supposedly to reduce the fire risk or to increase Bitterbrush (Purshia tridentata) for deer browse or to “save” the Sage Grouse. I think the reasons for cutting Pinyon Pines changes according to the audience and/or whatever may be a current hot topic. I was told the trees were “encroaching”. When I mentioned the concept of plant succession my contact at the Bureau of Land Management stopped responding to my emails. I also have observed that Bitterbrush has regrown from old crowns after wildfire but does not appear to be moving into the footprints of trees which were cut down.

Pinyon Jays are omnivores, sometimes eating insects and even small vertebrates, but the bulk of their diet is made up of the seeds (nuts) from the Pinyon Pine. Pinyon nuts rarely fall to the ground so the jays have to stick their beaks into the hellishly sticky cone to retrieve the seed. Humans who collect pine nuts often have a set of clothing dedicated to that specific purpose. Pinyon Jays lack the feathers other birds have around their nostrils which would be chronically globbed with pitch. I am always in awe of how these kind of things work out. Pinyon Jays also have an expandable esophagus which can hold a few dozen pine nuts until they can be regurgitated and buried. A mated pair of birds knows of one another’s stash. Uneaten seeds often become trees.

Pinyon Jays are social and monogamous. Their parties can number up to 500 individuals and most birds remain in the party they grew up in. They breed earlier in the year than any other passerine (perching bird) perhaps because the sight of green Pinyon cones will stimulate sperm and ovum development. I imagine Pinyon Jays could have some unusual pick-up lines. They nest in parties as well. There will be one nest on the the south side of each tree over a large area and yearling birds will help feed their younger brothers and sisters. As the young become flighted they will congregate in one location. The adult birds can always pick their hungry kids out of the bunch. They all look the same to me. Pinyon Jays will return to nest in the same area year after year as long as there is food available.

Pinyon Jays are considered a vulnerable species. The Pinyon Jay was placed on the 2016 State of North America’s Birds’ Watch List of bird species that are “most at risk of extinction without significant action”. According to the North American Breeding Bird Survey the Pinyon Jay populations fell 85% between 1966 and 2015. The decline is due to loss of habitat. The loss of habitat is due to deliberate decimation of the Pinyon/Juniper forests along with drought and an increase in devastating wildfires. As was mentioned above the reasons for decimating Pinyon/Juniper forests are varied.

In some areas the entire forest has been ripped from the ground by dragging a huge chain between two pieces of heavy machinery. Around my region it has been hand cut and maybe one tree on a grid of about every hundred feet or so has been allowed to live. A few clusters of trees have been tolerated. Pinyon Jays, like many creatures, thrive on edges but this is nothing but edge. There is no place to put a colony of several hundred nests. And the drought means the few remaining trees rarely produce viable seed. And even if there were seeds the Pinyon Jays are gone. The remaining trees may be the last. There is no one to disperse the seed. I can walk up the hill above my house and find groves of young trees in an area that burned 40 years ago. I have crawled through acres of cheat grass in areas that have burned within the past 20 years and not found a single infant Pinyon Pine. In one nearby location a group of people from a local and a national environmental organization spent a day removing Pinyon seedlings from an area which was clear cut in the first big push several years ago. The goal is to protect the Sage Grouse from predatory Ravens who will perch in the pines. I wish I had participated. Maybe I could have saved the trees I found. No, it would not have made much of a difference except to my heart. I don’t agree with sacrificing one species for another. The Pinyon Jay is headed for extinction too.

Last week I ran outside when I heard the jays. It had been so long since I had tried to count them. It had been so long since there had been a party of jays flying over my house. You will hear them before you see them. First there is the vanguard – a few widely spaced birds. Then small groups. Then larger groups. The cawing is becoming loud. I have lost count even before the largest portion of the party flies overhead. Then smaller groups. Then a few stragglers, often making a substantial amount of noise themselves. And I always wait a moment after I think they are gone because there is always one more. And then it is quiet. This time I cried.