On Saturday, August, 27, I and others from the Bodie Hills Conservation Partnership attended a cleanup at Travertine Hot Springs (Pamoo in Paiute) with the Bridgeport Indian Colony and agency partners. The Bishop Bureau of Land Management (BLM) Office, Humboldt Toiyabe National Forest (HTNF), the Intertribal Agriculture Council, Mono County Behavioral Health, and community members joined to clean up graffiti, pick up trash around the parking area and tub sites, and restore an old visitor-created road with vertical mulch and reseeding.

Historical Background and Significance of Pamoo and Coso Hot Springs

With the arrival of colonists to the Bridgeport valley, the Pogai-dukadu Band of Southern Numu (the word the Paiute use to refer to themselves, which means “the people”) began to settle near ranches working as buckaroos for wages. Many Numu people lived at or near Pamoo Hot Springs. In 1930, a presidential order prohibited people from living on federal land within one-quarter mile of springs with waters “containing curative properties,” and the Numu people retreated to a new area below the springs known as Old Camp. Eviction from Old Camp came in 1968 to the current reservation land in Bridgeport. After that time settlers and visitors started using the Springs, displacing traditional cultural practices.

Before the cleanup day’s activities began, we heard from Lone Pine Paiute Shoshone member and Native American coordinator for the Battle Mountain District of BLM, Will 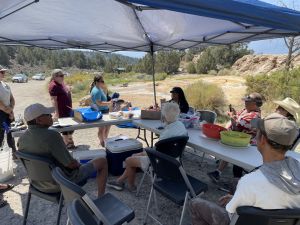 Nabahe, about the lessons learned at Coso Hot Springs, a place south of Lone Pine that is of cultural significance to both the Shoshone and Paiute people. Similar to Pamoo, the Coso springs were a gathering place for healing and ceremony. In the early 1980s, despite a Memorandum of Understanding with the Naval Air Weapons Station (NAWS) China Lake and opposition from the Tribes, the Navy started producing geothermal energy in the Cosos, and by 1986 the springs were depleted. Today the Navy extracts geothermal energy from the Rose Valley area and exports it into the Cosos. Although an MOU provides for traditional gathering in the Cosos, the springs themselves are no longer usable for traditional practices due to years of extraction creating extremely high temperatures in the existing water sources. Perhaps Coso is a lesson for Travertine.

Also, Geologist David Risley with the HTNF spoke about the post-colonial history of the Pamoo area. Travertine rock is a soft calcium bicarbonate that was mined in the 1890s and exported to San Francisco. Some of this travertine is still standing within the main room of San Francisco City Hall and was also used in high-end homes in the 1900s. Mining eventually ceased at the springs because of problems with flowing water creating extremely porous conditions on the rock. Since that time there has been geothermal interest in the area with several federal leases and wells drilled to evaluate the effectiveness of geothermal production. 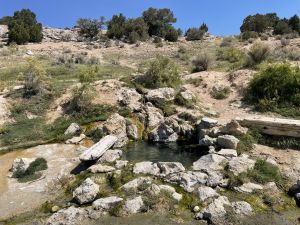 Since the springs are located within an Area of Critical Environmental Concern (ACEC), any geothermal development would be discretionary for BLM. The Bridgeport Indian Colony has a 1995 MOU with the BLM and is looking to update it based on current needs and increased recreational use of the ACEC. Among other things, there is an interest in education and signage about the cultural significance of the area so visitors can enjoy it in a respectful way.

Friends of the Inyo stands in solidarity with the Bridgeport Indian Colony in their ongoing effort to protect the springs and surrounding areas and restore traditional practices of healing and ceremony.

To learn more about the Bodie Hills Conservation Partnership and our work with the Bridgeport Indian Colony and other partners, visit BodieHills.org.