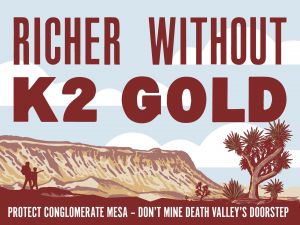 After four years of defending Conglomerate Mesa from the greedy hands of K2 Gold and its subsidiary Mojave Precious Metals, we finally got a temporary win. On March 17th, K2 Gold announced in a press release an “indefinite suspension of activities at the Mojave Project.” K2 is the 11th company to threaten the Mesa since the 1980s.

Conglomerate Mesa, the ancestral homelands and traditional territories of the Timbisha Shoshone and Paiute-Shoshone Tribes, is located in a remote area of the Inyo Mountains, east of Keeler, on the western doorstep of Death Valley National Park.

In a press release issued by Friends of the Inyo and Conglomerate Mesa coalition organizations, Wendy Schneider, Executive Director of Friends of the Inyo said, “Our heartfelt thanks to the many local residents, and diversity of supporters nationwide, who raised their voices with us to help fight this destructive extractive project that would have destroyed our beautiful lands to create profits for a private corporation. Make no mistake about it, this is a great day for people who care about irreplaceable public lands in Inyo County.”

After an unsuccessful appeal by the Conglomerate Mesa coalition, led by Friends of the Inyo, K2 Gold took over a plan of operation approved in 2018 by the BLM under a 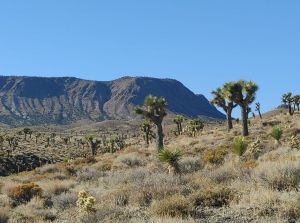 During a public comment scoping period in August 2021, the BLM received 23,800 comments, mostly against the project. Many commenters asked the BLM to analyze the project under an Environmental Impact Statement (EIS)  and the BLM listened. On March 9, 2022, BLM sent a letter to K2 Gold stating that it would analyze the potential impacts of the exploratory drilling proposal by preparing an EIS. BLM cited a number of reasons for this decision including:

-The resource concerns expressed by the public, Tribes, and agencies during scoping;

-The fact that the Joshua tree is now a candidate species under the California Endangered Species Act;

– The presence of Red Ochre Clay for which the Timbisha Tribe is named.

-The largest known population of Inyo thread plant in the Southern Inyo Mountains was observed in the area and is undergoing a California Rare Plant Rank status review (proposed 1B.2);

-Tribes expressed their concerns that the proposal could impact the holistic value of the area;

We were grateful to learn of the BLM’s decision and believe that it was the right decision for this highly controversial proposal. The use of an EIS involves a higher level of review of a proposed project’s environmental impacts and a longer public comment period than what would occur with an Environmental Assessment. Although it is rare for BLM to require an EIS for an exploratory drilling project, Conglomerate Mesa is no ordinary place!

Don’t forget to subscribe to the CM newsletter to learn more about next steps for the Mesa. For more information on Conglomerate Mesa, check out ProtectConglomerateMesa.com.