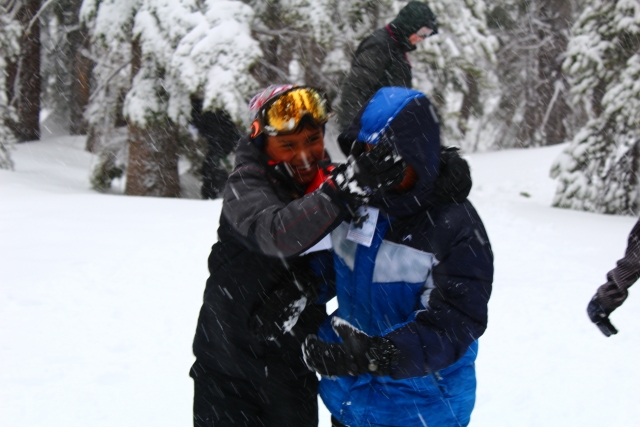 David Page: Snowschool is a program that is developed by Winter Wildlands Alliance and has expanded to about 60 sites, and reaches about 32,000 kids a year. The goal is to get kids out on snow in winter time to learn about watersheds, water cycles, winter ecology, winter wildlife, and for a lot of kids across the country, it ends up being their first time ever on snow. Just to have that experience is radical. A lot of the kids are Title 1 kids or urban kids that are heading up to the mountains and in our case, it’s a lot of kids who live in snowy environments, but don’t have that culture of getting out on snow. To give them that exposure is the ultimate goal.

Why bring SnowSchool to Mammoth?

DP: It was natural. We live with tons of snow. We have a population somewhere between 50-60 percent Hispanic. Certainly a lot of our kids are out on ski team, and out on the snow all season long, but a lot of the kids don’t get that. A lot of the snow science isn’t necessarily coming into the schools, so it seemed a great way to pioneer it for the Eastern Sierra. Try to get a lot of those kids out and about and try to start to start understanding the meaning of snow and to begin to learn about the watershed and see that snow translates directly to water in the tap, for starters. The point is to begin to see the complexity of flows through the watershed, what it means when it snows, what it means when it melts.

The conception that a lot of people have, and kids inherit, is that it’s sort of the dead zone, when in fact it’s the source of life for most of the year. So it’s to try and open the kids’ eye to that. At a primal level, it’s also to show kids how much fun there is to be had in winter. We take that for granted. You and I as backcountry skiers take that for granted, but a lot of Americans retreat from winter. So we try to begin to open up the door to embracing winter and understanding what it is and to understand that you can go out and enjoy it and thrive in it.

Did you have an experience like SnowSchool when you were a kid?

DP: Not really. No, I don’t think I did. I had a lot of great science programs, but never anything specifically geared towards what happens specifically in winter.

BW: I didn’t either

DP: I grew up in snow. I spent a lot of time in the snow.

BW: I did too, but I never connected school to skiing.

DP: I didn’t either.

BW: In hindsight, for someone like me, it could have opened doors to thinking about what I could have done with my life.

DP: It was the same for me. For me, the gateway, like for a lot of people, was downhill skiing and riding the lift up, hearing Steller’s jays and noticing squirrels out and just loving the mountains in winter. And then I started to get in backcountry. I spent a couple of seasons training dogs for dog sledding. I lived in winter, was taking tourists out, and that’s where I really started to learn what’s going on in winter. I learned what’s happening in winter and it isn’t just this bleak landscape. I didn’t get that in school.

Was there a favorite moment from SnowSchool from last year?

DP: It was amazing. The kids had a blast the entire day. It was blizzarding both of the days that we did it with really adverse conditions, but the kids loved it.

BW: I didn’t hear one kid complain (about the weather).

DP: I didn’t either. Some of the kids were on ski team or friends with my kids, so I knew them because it’s a small town. There’s a lot of kids who don’t really go outside during winter. Some didn’t even bring gloves. Some had absurd gear for what you’d need for a snowstorm, and they still had a terrific time. It’s kind of a fun bait and switch where you do the fun and games and at the same time they’re learning; you sneak in the learning around the fun. I think they were lapping it up and were really interested.

Do you have a favorite activity from the SnowSchool curriculum?

DP: What really got down to fundamentals and where everybody was paying attention was digging a snow pit. They loved the digging part.

BW: I love that moment when they realize there’s layers in the snow and they can tunnel under certain layers.

DP: I totally agree. It’s kind of consciousness expanding to see there’s this whole history in the snow pack the deeper I dig, the longer back it goes. The Snow Water Equivalency experiment also, is mind blowing. They kind of know that you’re going to melt snow down and water’s going to fill less of the container. Melting snow in a container, there’s a direct equivalency. They’re pretty simple scientific concepts that kids get that are hands on and super graphic. It’s eye opening.

BW: I like to let them hypothesize before doing it, and each kid gets to take a guess at how much water there will be after melting the snow.

DP: That’s the goal of SnowSchool. You’re asking questions. You say, let’s look at this thing and what do you see? What do you guys think? You let them theorize, talk about it, and work your way through toward the synthesis of data. That brings them through a process that helps them engage and stay curious.

Did you do the belly slide (A classic SnowSchool activity where kids slide down a hill on their belly)?

DP: A number of times. I was a little reluctant because I’ve had my share of broken ribs and a broken clavicle. Even that one, I was a little bit cynical at first because I thought it was just for fun.

BW: Like something fun we’re withholding as a reward for good behavior?

DP: Yeah, but I think there’s a lot to learn there too.

BW: I know some kids are not confidant before doing it, but then they watch their buddies doing it.

DP: By the end, you can’t tear them away.

What are you looking forward to in this year’s SnowSchool?

DP: I’m really excited, and I think all the teachers are excited. It was great to have one day on the snow, but it demonstrated the need to expand it to all the seasons to see the cycle. As we were doing, for example, the snow pits or, as another example, viewing the measurement instruments up at mid station (on Mammoth Mountain), I realized that if we started in the fall before snow, track the snow as it’s building so they have a concept of what’s been happening over the season, and then dig the snow pit in a manner they can touch, it’s so much more resonant, right? Then we have them follow it through in the spring as its melting. A lot of other SnowSchool sites do a snowpack prediction contest. That’s a neat idea too. We get everybody involved in asking how much snow is there going to be, and follow those instruments and data through the course of the year to really see what’s happening, when its melting and what it means for stream flows. I’m super excited about what we can do this year.

BW: I’m excited too for the winter ecology and connect that into aquatic invertebrates or trees dropping their leaves in fall. Some of those things are naturally going on, and it all doesn’t happen independently. There’s so much potential to bring that all together.

DP: It’s the kind of thing we need more of as kids get more and more into the digital environment. We need to bring them back to the natural world, natural cycles, and what it means across the landscape and what it means to the whole cycle.

BW: I like the repetition too. I taught at outdoor school, and it was hard for me to have them for one week, and then they’re gone. I think the follow up, like you said, is key.

DP: Absolutely. That’s one thing the teachers are stoked on. We’re bringing it into the classroom, and having it go through the course of the year. We’ve built it so that it feeds into some of the Common Core standards, and it reinforces what they’re learning in the classroom. Not just in terms of the specific outdoor ecology either, but in terms of the scientific method and reinforcing asking questions and doing the work to prove your hypothesis. It’s always going to have more impact if you’re doing it in the field.

BW: Some kids pick that up in the classroom, but for other kids, it’s a struggle being boxed inside. I’ve seen kids who literally thought they were bad students, but then outside they open up.

DP: To bring it back to your question of why Mammoth? If you flip it on its head, it’s so absurd that we don’t have across the board outdoor education. We drop our kids off at school when on the way, we see some of the most spectacular mountains in the West. Then they go inside during the day and the winter with short days and come out with limited understanding of how that stuff works. I think the more we can do to get them out doing really experiential education, I think the better we’re going to be as a community.

Any major plans for SnowSchool beyond this year?

DP: Part of what’s neat about this is it brings different organizations with different missions together. It’s great to have Friends of the Inyo, Eastern Sierra Interpretive Association, Winter Wildlands Alliance, Eastern Sierra Avalanche Center, and Mammoth Elementary participating.

BW: And also getting the mountain (Mammoth Mountain Ski Resort) on board.

DP: The Mountain seems to be excited about it. Hopefully that will continue. Obviously everyone’s got their little piece of interest, and if something like this continues, assuming we can pull off a full year’s curriculum with three field trips and a half day in the classroom, I would definitely love to bring it down to Bishop, start to involve the Paiute Tribe, and maybe take it to Lone Pine. Down here in the Owens Valley, you spend the winter looking at the snow and obviously the water shed is really important in the Eastern Sierra. How much of that do the kids get in school? Maybe not very much? I’d love to spread it out.

SnowSchool in 2017 would not have happened without the following organizations working together: Mammoth Elementary, Eastern Sierra Interpretive Association, Friends of the Inyo, Eastern Sierra Avalanche Center, Mammoth Mountain, and NASA/JPL. This year, ESIA and FOI are planning the year round curriculum and look forward to the further support of other Eastern Sierra organizations.