The Trump administration announced plans for the largest roll back to the National Environmental Protection Act in its 48 year old history.

***Update: The comment deadline has been extended from July 20 to August 20.
Hooray! There’s still time to click here and tell the federal government that you want a say in how your public lands are managed!***

The backbone of NEPA is the public review process allowing scientists, non-governmental organizations like Friends of the Inyo and the public to have a say on federal projects that impact public lands, air, water and wildlife. We know the current administration is no friend to the environment, but this is a step too far.

NEPA underpins the requirement for thorough environmental analyses of every federal project. Although NEPA is not as well-known as the Clean Air Act and the Endangered Species Act it is just as important.  Friends of the Inyo is concerned rollbacks will hamper the public’s ability to weigh in on projects impacting Eastern Sierra public lands.

The Council of Environmental Quality (appointed by Trump) is tasked with the rule-making changes and published its Advanced Notice of Proposed Rulemaking (ANPR) in the Federal Register on June 20 opening a comment period that closes July 20.

Friends of the Inyo requests:

Many of the questions the administration is asking the public to comment on involve understanding not just the words in the regulation itself, but decades of administrative and judicial interpretation.

The current comment period of 30 days is simply not adequate –especially for the public who rely on NEPA as the only way to weigh in on decisions impacting their communities and who must make time in their busy lives to read the regulations and respond to this attack in a meaningful way.

Detailed input from residents, visitors, the scientific community, and NGOs crafted the current and future Inyo National Forest Plans.  The ability for the public to express concerns over Conglomerate Mesa resulted in a helicopter access alternative, as opposed to the opening of roads in a wild area. In our small corner of the world the stakes are high and we ask you to oppose any changes to NEPA regulations.

Click here to comment and let the federal government know that
you want to keep the public’s voice a part of the management of your public lands. 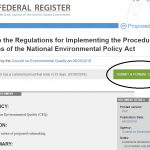