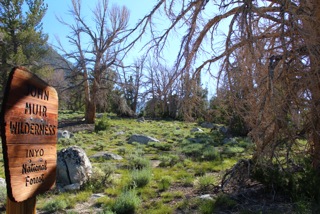 My Favorite Trees: Reflections on a forest, the whitebark among us.

I think I first noticed the dying trees in 2010, but others had observed them before me. A friend pointed it out one day while skiing along the Tamarack Bench in Rock Creek. A ski tour can be a quiet endeavor through a forest that at times may seem to have little to say or show besides the hum of the winter wind or chickaree tracks running from one tree to another. We paused in the grove of dead trees, and, standing among the skeleton snags, we listened to a chorus of bird song- what sounded not like an out of season straggler or two, but a whole symphony.

“It didn’t used to be like this,” my friend said. “You would just ski among the living trees, and it would be silent.” When we skied out of the “dead” forest and back into the “living” forest, it got winter silent again.

The trees dying along the Tamarack Bench are whitebark pine. The whitebark is the beautiful pine species with five needles to a fascicle that grows at the highest elevations and puts up with the wind and snow load by bending and twisting but never giving in to being broken. Its cones come out dense and purple and covered in sap. You can barely open them with your fingers– you’ll need a knife to get at that seed. They hang at the top of the tree’s branches, and the Clark’s Nutcracker is so adept at collecting the whitebark’s seeds that you’ll rarely find the cones laying on the ground, although once I wandered through an untrammelled basin and discovered the scarlet shavings of their scales carpeted atop logs where there must have been a festival of nutcrackers sharing their spoils. The nutcrackers place thousands of whitebark seed caches in the soil of mountainsides and ridgelines, and the very few they lose track of sprout in clumps. When California had grizzlies, digging up the nutcracker’s buried caches of whitebark seed was the last boost the great bears had before they curled into their den to slumber the winter away.

These days the whitebark pine is not doing well. Drought and a non-native blister rust are decimating the species across the Western United States, particularly among the Rocky Mountains. And, where is a species that inhabits the highest of elevations supposed to go as global temperatures rise? The United States Fish and Wildlife Service formally listed the tree as a candidate species for the Endangered Species List, but citing lack of resources and other priorities, has yet to officially list it as endangered. So up to this point bureaucrats have determined that the scale of the problem and the lack of practical solutions precluded official protection and that essentially the best action is to stick our heads in the sand and hope for the best.

Since 2010 I’ve watched the spread of the die-off across the Tamarack Bench and up the shoulder of Mt. Morgan. Across the canyon, it’s overtaking the Hilton Bench and Patricia Bowl. Now I’ve started to notice the bleeding begin in Little Lakes Valley.

To be fair, the die-off in Rock Creek is not to the same scale as other places on the Eastside like June Lake, and an ecologist informed me that the White Pine Blister Rust is not affecting whitebark in our area. The whitebark die-offs in Rock Creek and June Lake pale in comparison to other places, like Idaho and Colorado where whitebark have been decimated across whole mountain ranges. Other species of trees are not immune either. If you’ve driven through the west side of the Sierra, you’ve noticed hillsides covered in the golden hue of dead trees. A recent High Country News article stated that in places like Shaver Lake, 90 percent of ponderosa pine have died, and in a recent Friends of the Inyo staff meeting, Laura Beardsley described the die off on the hillside above El Portal as heartbreaking.*

It pains me to imagine people helplessly observing the loss of trees they hold dear in places they call home. For many of us, trees are as much a part of the definition of place as lakes and rivers and mountains and rock, especially here in the Sierra where spectacular trees blanket the landscape.

I once heard a ranger in Yosemite talking about hibernating black bears quip that it must be nice to sleep away a stressful period of your life. Part of me wants to sleep this away and return sometime in the future when it’s all been put back in place. Still, if there’s one thing I’ve noticed in my nearly four decades of life, it’s that change is inevitable and it can be futile to fight the change you cannot stop. Who am I to say that I know what’s going to come of this place in the future and to assume that it will not still be beautiful?

Now when I’m on the Tamarack Bench in Rock Creek, whether I’m skiing or hiking, I find myself slowing down and enjoying the whitebark more than I used to. I pause at the base of the trees and look up at their majestic crown, whether they’re living or dead. I get excited in summer when the cones emerge. I also notice the stark beauty of the bare branches reaching towards the gray sky and how it’s opened a view of Pointless and Patricia Peaks through the dead branches. Most of all, I’m damn sure to pause and enjoy the whitebark that are still vibrantly green, that are still popping sappy purple cones out of their branches, that are not giving up on the changing temperatures at this elevation, that are still bending but not breaking.