The “Wheels in Wilderness” Bill

We all know and love the Wilderness Act of 1964. For decades it has protected wilderness areas designated by Congress from motorized and mechanized uses. There have been many attacks on the Wilderness Act over the years, but the latest is H.R. 1349 , which seeks to drive a wedge between users groups and our allies.  Friends of the Inyo supports mountain bike recreation and recognizes the need for more trails in areas outside of Wilderness. Proponents of HR 1349 are trying to erode the Wilderness Act piece by piece with misinformation.

Please write your representatives and tell them you support the Wilderness Act and oppose H.R. 1349

The “Wheels Over Wilderness” bill, introduced by Congressman Tom McClintock (R-CA), carves a gaping loophole in the 1964 Wilderness Act. The bill would open America’s 110 million acres of wilderness areas to mountain bikes, an unprecedented assault on wilderness areas across the country. For five decades Congress has resisted efforts to undermine the Wilderness Act by opening wilderness areas to uses that are currently prohibited. These efforts have failed due to strong public support for wilderness. With less than 3% of the land in the continental United States designated as wilderness, there are plenty of lands— including public lands—that remain open to mountain bicycles outside wilderness. H.R. 1349 also attempts to use wheelchair access as a reason for amending the Wilderness Act. Section 507 of the Americans with Disabilities Act already makes clear that wheelchairs are permitted in wilderness.

On November 14th, the Inyo County Board of Supervisors discussed a letter to the Bureau of Land Managment regarding the Perdito exploratory drilling project at Conglomerate Mesa located in the southern Inyo Mountains north of Highway 190. Over 50 concerned citizens attended the meeting with 20 residents giving oral comments to the Board in opposition to the project. After discussion, the Board modified an existing letter to exclude any support of the project’s four alternatives and simply offered corrections to the BLM regarding omissions from the Environmental Assessment. The comment period for the project closed on Monday, November 20th. We expect a decision from the BLM in early 2018.  Read our comment letter here: BLM Perdito coalition comment letter FINAL.

The following day Secretary Ryan Zinke’s report on the National Monument Review was finally released. The report recommended the reduction of Cascade Siskiyou National Monument however there are no specifics on the boundary modifications or maps available.

Please contact your Representatives today and ask them to speak out in defense of America’s National Monuments.

This bill, sponsored by Rep. Rob Bishop (R-UT) to gut the Antiquities Act, advanced out of the Natural Resources panel on a party-line vote in October. The bill will likely not go to the House floor for a vote until early 2018. Please continue reaching out to members of Congress to educate them about this bill and what it could mean for new and existing monuments.

The deceptively named Resilient Federal Forests Act passed the House on Nov 1st (232-188).  The bill will now move to the Senate for a vote where it is expected to receive increased scrutiny. Please contact your Senators to express your opposition to this bill. 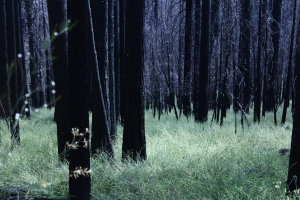 Conglomerate Mesa is, once again, under attack from mining interests. This is the first roadless area in California targeted for development under the Trump administration. We are not being alarmist when we say these exploratory drill sites are only the beginning. The ultimate land management goals of the current administration are explicitly extractive: mine the land until it stops making money, and then abandon it with as little regulation as possible.

Conglomerate in a natural, wild state is precious and irreplaceable for the following reasons:

• Conglomerate Mesa is a spectacular wilderness quality landscape of Joshua tree and Pinyon-pine woodland with elevations ranging from 3,800 to 7,100 ft. From the top of the mesa, visitors can see expansive views of multiple wilderness areas, Owens Lake, the glittering Sierra Nevada and into the expanses of Saline Valley and Death Valley National Park.
• The historic Keeler-Death Valley trail, circa late1800’s, crosses the north end of Conglomerate Mesa and should be preserved for its cultural and historic significance.
• The area is prized locally for deer hunting.
• Multiple special status and rare plant species are found within the proposed project area and will be impacted by drilling.
• Local tribes oppose the project as the mesa is an important tribal site for traditional uses.
• The area is rich in heritage resources exemplified by the remains of historic charcoal and stone masonry sites used in the late 1800’s to supply the Cerro Gordo mine.
• Tourism and recreation remain the primary driver of Inyo County’s economy: total direct travel spending in the desert region in 2013 reached $6.2 billion. While mining comprises only 3% of employment in Inyo County, industries that include travel and tourism comprise 33%.

Industrial-Scale mining would forever and irrevocably impact a natural resource and a beautiful place.

• The ultimate objective of this project is an open pit (cyanide heap leach) gold mine. Such an operation would permanently damage the area’s wild character, degrade wildlife and plant habitat, and pollute scarce local water systems. It’s well documented that cyanide heap leaching poses significant hazards to plants and animals from gold mining and related toxic water issues. Mining operations are likely to provide only limited local revenue and employment, while creating lasting environmental damage that will not only scar the land but degrade Inyo County’s reputation as a scenic, outdoor recreation destination.

The Environmental Assessment, currently open for public comment through Nov 20th, has four alternatives:
1) No-action alternative,
2) Construction of an overland route
3) Opening a road restored by the BLM in the 1990’s
4) Helicopter access

Friends of the Inyo asks you to write the BLM to suggest the “no-action” option and deny any permitting whatsoever for this project.

Join us and let’s work together for this place.

The Washington Post has published a leaked copy of Secretary of the Interior Ryan Zinke’s National Monument report. Read it here. It has the following suggestions:

While California Monuments adjacent to the Eastern Sierra have been spared (for now), this is a historic threat to American public lands. A threat to one is a threat to all. Contact your legislators and the Department of the Interior and voice your support for National Monuments.

All summer long we have been working with our state and national colleagues to pressure Department of the Interior Secretary Ryan Zinke to listen to the 2.8 million comments received (99% in support) of saving national monuments and the defense of public lands. Thursday, August 24 was Zinke’s deadline for his final report on National Monuments and the White House is still keeping everyone in the dark about their plans. We did learn that Zinke is recommending to drastically reduce at least four national monuments. You can read Department of Interior’s 2 page summary here. Let’s be clear: any potential degradation, shrinking or modification of our protected public lands is unacceptable no matter how the Administration is spinning it to the public. Any actions that would dismantle these natural wonders will result in the destruction of Native American archaeological sites, lost access for hunting and fishing, and economic harm to local businesses. The actions of this administration and our response is precedent setting- if we don’t defend public lands throughout the state, the Eastern Sierra could be next! Any attempt to shrink our monuments will be met with swift legal action. We are following the process closely and will send updates out as soon as the full report is released.

In late August we submitted comments of the Environmental Impact Statement for the Mammoth Base Land Exchange.  Under the Proposed Action, the Forest Service would exchange approximately 35.6 acres of National Forest System lands within the boundaries of the Inyo National Forest, and currently managed as part of a Ski Area Term Special Use Permit to Mammoth Main Lodge Redevelopment, LLC in exchange for approximately 1,296.7 acres of privately owned lands located within the boundaries of the Inyo, Plumas and Stanislaus National Forests and one 1.4 acre parcel in Bishop, CA adjacent to the White Mountains Visitor Center.

We expressed our concerns that the EIS did not adequately address impacts to wildlife, groundwater and recreation at Mammoth Mountain. We also provided recommendations for future management of the parcels that would become public land. If you wish to receive a copy of our comments please contact jora at jora@friendsoftheinyo.org. 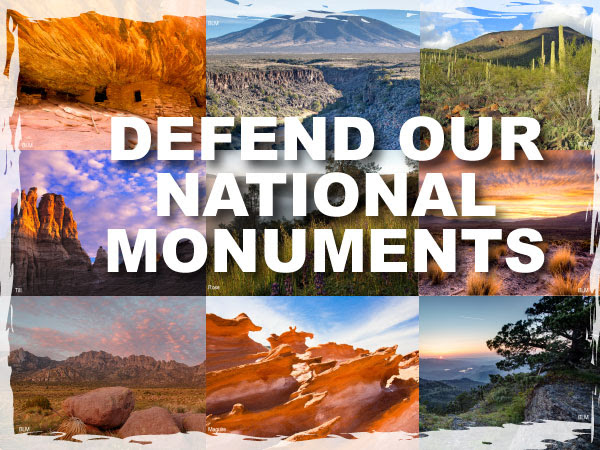 In California, monuments under review include Berryessa Snow Mountain, Carrizo Plain, Sand to Snow, Mojave Trails, San Gabriel Mountains, and Giant Sequoia. The California State Legislature and Attorney General have already sent their messages to the Drumpf administration: Leave California’s Monuments Alone!  Comments including mention of the economic importance of monuments to local rural economies, reference to unique landscapes, cultural or historical treasures, and personal experiences are most impactful. View Friends of the Inyo’s comments on all California monuments here.

If you live in the Eastern Sierra, contact Congressman Paul Cook to voice your support for retaining the current boundaries and protections for California’s national monuments. Representative Cook recently signed a letter from the Western Caucus to Secretary of the Interior Ryan Zinke, supporting, among other things, the reduction in size of California’s Mojave Trails and San Gabriel Mountains National Monuments. Representative Cook did not seek input from his constituents regarding his decision to support the reduction of these monuments, nor did he post the letter on his website, probably because all available data indicates that monuments enjoy overwhelming bi-partisan public support in California and across the West. The Western Caucus letter is also in direct contradiction to bipartisan support from state lawmakers for California monuments. View our response to Cook here.