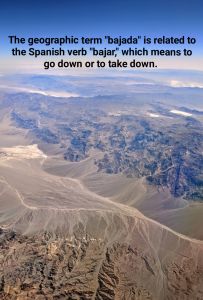 This is our final post for this year’s National Hispanic Heritage Month, which ends this Friday, Oct. 15.

Since Sept. 15, when it began, Friends of the Inyo has been celebrating with our community by sharing the meanings of just a few Spanish-language words in the nature and conservation arena that have made their way into English.

Today’s word is bajada, the feminine form of bajado, the past participle of the verb bajar, which means to descend, go down, take down, or get off, as from a horse. According to Merriam-Webster, a bajada in English means a broad alluvial slope extending from the base of a mountain range out into a basin and formed by coalescence of separate alluvial fans. It apparently has been used in the U.S. since the 1860s.

How bajadas are formed, Wikipedia explains, is like this: “When a stream flows downhill, it picks up sediment along with other materials. As this stream emerges from a mountain front, the sediment carried begins to be deposited, such that coarser sediment is deposited closest to the base and the finer sediment grades outwards and deposits in a fan-shape away from the mountain face.” Sounds and looks pretty, but, like an arroyo, our Hispanic Heritage Month word from last week, this type of landscape can be dangerous after a heavy rain, as flash flooding can occur.

Because bajadas are common in warm climates, they are easy to find in desert landscapes, including Death Valley. In fact, the photo featured  here (by Dicklyon) offers magnificent aerial views of bajadas in Death Valley north of Stovepipe Wells.

And just like sediments are carried from a higher elevation to a lower one, bajada in Spanish connotes a number of things that go from a higher place, level or intensity, to a lower one: bajada de precios (the lowering of prices); después de esta calle hay una bajada (after this street, there is a downhill slope); ha habido una bajada extrema de temperatura (there has been an extreme drop in temperature).

Just remember that bajada is related to the name of that wonderful travel destination south of the border, Baja California (Lower California), which the Spanish named so to differentiate it from where we live: Alta California (Higher California) which is farther north.

And that finishes off our fun, linguistic celebration of Hispanic Heritage Month on social media.

Till next year, and more fun posts during Hispanic Heritage Month 2022 with Friends of the Inyo, adios, amigos!