The inception of Friends of the Inyo was spurred by the 1980’s planning process for the Inyo National Forest. In 2013 the Inyo National Forest began revisions to their Forest Plan, under a new planning rule adopted by the U.S. Department of Agriculture in 2012. True to our history, Friends of the Inyo is committed to engaging in this important and precedent-setting opportunity until the final plan is completed. After the signing of the plan we will engage in Plan implementation, working with the agency to achieve its goal and objectives into the future.

The Inyo National Forest is home to the iconic Mt. Whitney, the Ancient Bristlecone Pine Forest, the Ansel Adams and John Muir Wilderness Areas, the headwaters of the Owens River, the second largest roadless land acreage in California, and unparalleled opportunities for recreation, scenic vistas, and solitude. This new management plan is the guiding document for the Inyo National Forest, and will determine the fate of these idyllic landscapes. The Inyo is one of eight “early adopter” forests for this new rule, along with the Sierra and Sequoia National Forests. This process will set the precedent for how all other national forests will revise their management plans in future years.

Beginning in 2013 Friends of the Inyo’s board and staff compiled and submitted extensive comments to the Forest’s Topic Papers – foundational documents covering everything from timber to meadow health to grazing and wilderness. Throughout 2013 and 2014 we commented on the Forest Assessment, the Need for Change, Desired Conditions and the Preliminary and Final Wilderness Evaluations, as required under the 2012 Planning Rule.

On October 1, 2014 Friends of the Inyo staff compiled and submitted extensive Scoping comments. Our comments covered everything from at-risk species to Wilderness (view a map of areas to be recommended as wilderness here) and Wild and Scenic River recommendations.

On May 27, 2016 The Forest Service released the Draft Forest Plan and Draft Environmental Impact Statement, opening a 90 day comment period which closed August 25th, 2016. Find our comments throughout the planning process and other pertinent attachments here.

In July of 2017 the USFS released a preview of changes made to the EIS that would be reflected in the FEIS and Final Land Management Plan. They cover resource issues regarding Sustainable Recreation, WSRs, Aquatic and Riparian and Species of Conservation Concern.

On August 3, 2018 the USFS released the Final Plan, Final EIS and draft Record of Decision. The Forest Service hosted a public meeting on August 7, 2018.  On Oct 2, 2018, along with our partners we filed an objection on the final plan highlighting it’s deficiencies.  Take a look below at the diversity of comment letters and engagement we have had across the Eastern Sierra landscape. We also filed interest party status on October 23, 2018. The USFS considered our objections as part of a 3 day public meeting held in Bishop Feb 19-21, 2019. We worked with other objectors and the Forest throughout March and April to find solutions and work on additional changes. Many of these changes were reflected in the final land management plan that went into effect in November of 2019 after the October 2019 signing of the Final Record of Decision by the Forest Supervisor.

If you don’t have time to read our comments you can check out this Sierra Nevada Forest Planning Coalition Fact Sheet for more information on specific topics and issues.

Make a meaningful contribution
to Friends of the Inyo.

Sign up to receive updates
from Friends of the Inyo. 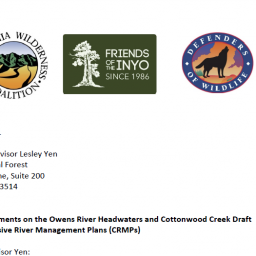 For the Comprehensive River Management Plan (CRMP) to fulfill its protective purpose, it is essential that the plan go beyond a simple recitation of resources and issues and focus on current and future actions that could harm the free-flowing condition, outstandingly remarkable (OR) values, segment classification, and water quality of the protected river. Unfortunately, the draft CRMP for the Owens River Headwaters Wild and Scenic River (WSR) fails this test. In particular, the CRMP and accompanying Resource Assessment fail to provide crucial information about groundwater extraction from aquifers that contribute to the flow of the Owens River Headwaters WSR. 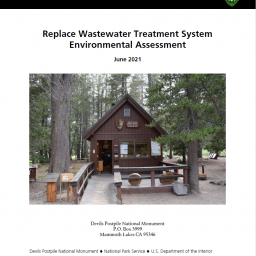 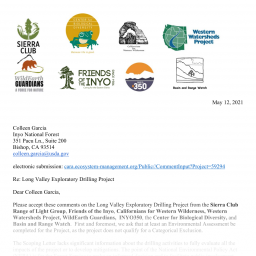 Coalition Opposes Forest Service’s proposed Categorical Exclusion to Drill for Gold in the Long Valley Read the full letter here Background and Main Objections Kore Mining intends to proceed with exploratory drilling under a catagorical exclusion (CE) to, circumvent environmental review, from the Forest Service. Friends of the Inyo coauthored a 40 page with a powerful coalition of local, regional, and national groups.  argued wrote a 40 has long enjoyed serving and recreating in the Alabama Hills. This important document outlines how the plan does not meet Forest Service regulations for a categorical exclusion, and should require an environmental assessment…