The varied desert environments of Death Valley are among the harshest on earth. Every climatological feature or event happens in extreme fashion. 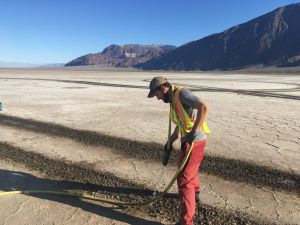 As such, every landscape, formed over millennia by these weathering forces, is delicate. when something disrupts it, it is unlikely that balance will naturally be restored for many moons. So when a vehicle drives off a designated road or route (a big no-no in the National Park), it leaves a scar that is going to be there a while and serves as an implicit invitation to others to join in on the destructive driving. 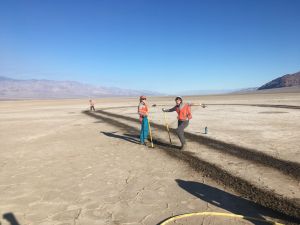 Which is all why Friends of the Inyo joined Death Valley National Park and Great Basin Institute staff to figure out the best ways to “efface” such tracks and avoid any misguided encouragement or permission folks might get from seeing another set of tracks out there. We’re descended from monkeys after all, and as the saying goes, “Monkey see, monkey do”. 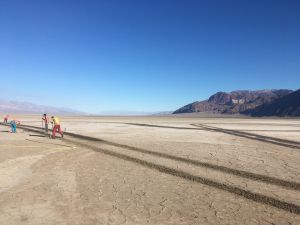 This fall, we got the green light from our National Park Service (NPS) partners to do eight weeks of stewardship in the park, doing effacement to restore the playas folks have driven across to a natural state. 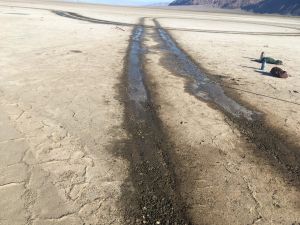 It is interesting work, as we are creating and refining the processes as we go. The soils, rocks, and landscapes of Death Valley are truly one of a kind, and as such the work we are doing is unique in its methods, tools, and processes. Though it is quite fun, as we communicate, problem solve, and learn as we go.  We’ve settled on a system of aerating and tearing up the track, tamping it back down, and then watering it. We are very optimistic this will efface the visual scars the best over the long run.

This requires some great team work, so thank goodness we’ve got our all-star crew out there. Lindsay Butcher is FOI’s fearless leader on the ground, and Maggie McClain, Tess Irving-Ruffin, and Jamie Jirele have rounded out the crew. Matt Ferlicchi is our NPS liaison and the orchestrator of the symphony that is our work.

As I write this on November 4, the crew is amid their fourth week of work in the park, and we are hoping to get four more off before the end of the year. It is hard work and we’ve seen Death Valley’s mercurial weather at its finest. 108 degree day in mid-October and furious night-long winds make physical labor in the field feel that much rougher. Kudos to our hearty group for doing the good work out there!

Thanks for doing this you guys. I will be 70 in January, and as much as I hate to admit it, I am getting to old to be able to contribute much physically to this type of work. It’s been over 30 years since I worked on my strawberry farm north of Missoula, which is probably the last time I did that much hard hand tool labor on the land.

Thanks again for doing this. Those vehicle tracks on the playas drive me crazy when I see them. It’s seems exciting to take a vehicle out on a playa to people after watching thousands of beer commercials, but it’s actually pretty boring. I used to camp out on the Black Rock Desert when driving between Seattle and Death Valley in the 90s before the Burning Man got huge.

Thanks to everyone for all your hard work to restore our precious Death Valley. So appreciating. Warm regards – Jude Baker, DV lover

Many thanks for your hard work and restoration. I love Death Valley, and i love that you are truly caring for the earth.

I was able to participate in the original race track restoration in Feb. 2018. It sounds from this article that you are staying in-house for your work force and not using volunteers for this latest effort – a C-19 thing?

Hi JB,
After the awesome work y’all were able to do on the Racetrack as volunteers in 2018, FOI and Death Valley NP decided to enter into this agreement. It was very much the impetus for our current work, however with so many trespass tracks around the park, we both decided that a dedicated professional crew–in addition to possible volunteer events–would be the most successful. Of course 2020 has been a hard year for volunteer events, but in the future, we hope to do more!
Thanks,
-Alex Ertaud, Stewardship Director, FOI