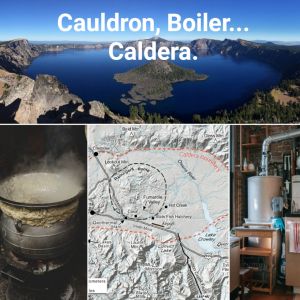 National Hispanic Heritage Month is observed from September 15 through October 15. Friends of the Inyo would like to celebrate with our community by sharing the original meanings of just a few nature or conservation terms that have made their way from Spanish into English.

Caldera is the Spanish word for cauldron or boiler. It has been adopted into English as a geological term that, according to the National Geographic Online Resource Library (nationalgeographic.org/encyclopedia), means a large depression formed when a volcano erupts and collapses.

The main difference between a caldera and a crater is twofold:

Some examples of calderas are Oregon’s Crater Lake, in the top Athleticamps photo of the composition at right, and, right here in the Eastern Sierra, the Long Valley Caldera, which can be appreciated in the U.S. Geological Survey map.  The Long Valley Caldera page on Wikipedia says it is “one of the Earth’s largest calderas, measuring about 20 mi (32 km) long (east-west), 11 mi (18 km) wide (north-south), and up to 3,000 ft (910 m) deep.”

Interestingly,  according to Wikipedia, the term caldera was introduced into the geological vocabulary by a German(!): the geologist Leopold von Buch, in his memoirs of his early-19th-century visit to the Canary Islands. (Coincidentally, as of the writing of this post, a volcano is erupting and wreaking havoc in La Palma, the northwesternmost of the Canary Islands, which has a national park named after a caldera: the Caldera de Taburiente National Park. The eruption began Sunday, Sept. 19.)

As the “Double, double toil and trouble: Fire burn and cauldron bubble,” chant of the three witches in Shakespeare’s Macbeth portends, a caldera could cause a lot of trouble if it were to become a “resurgent caldera,” meaning, according to National Geographic, one where the magma chamber fills up again, pushing up the caldera floor. Wouldn’t want to be around to see that cauldron bubble!