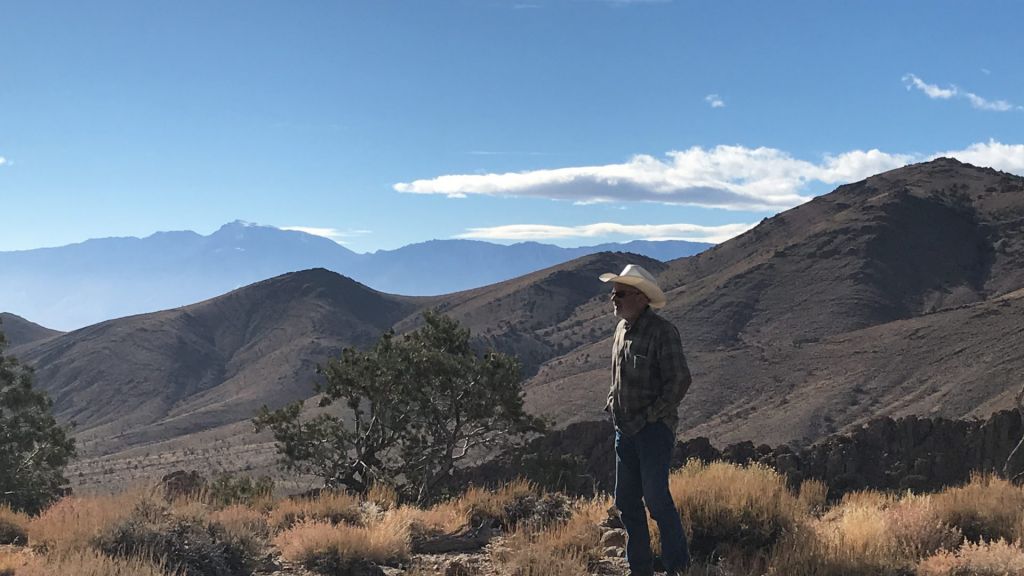 The season of visiting Conglomerate Mesa is on its way out as desert temperatures quickly rise into uncomfortable ranges and folks from across the west are getting in their final trips. As people trend away from their desert trips in Saline Valley and the Southern Inyo Mountains, Conglomerate Mesa remains in limbo from mining threats that would forever alter these landscapes where people from across the globe come to explore and recreate.

K2 Gold and Mojave Precious Metals are ramping up for their much more destructive second phase of exploration at Conglomerate Mesa. Early this Spring, the BLM received K2 Gold’s next application proposing miles of new road construction, overland routes, and 120 drill holes at Conglomerate Mesa. According to the proposed plan of operations, the total impact from their work is estimated to be 12.2 acres. For perspective, K2 Gold’s previous helicopter access only exploration was only permitted 0.2 acres of disturbance. This is an increase of impact 61 times over, the likes of which have never been seen at Conglomerate Mesa.

With this mass impact comes the related heavy-duty equipment. A few examples of the equipment the company proposed to use are four tire-mounted drills, one motor grader, two backhoes, two 4,000 gallon water tanks, and more. See table below. 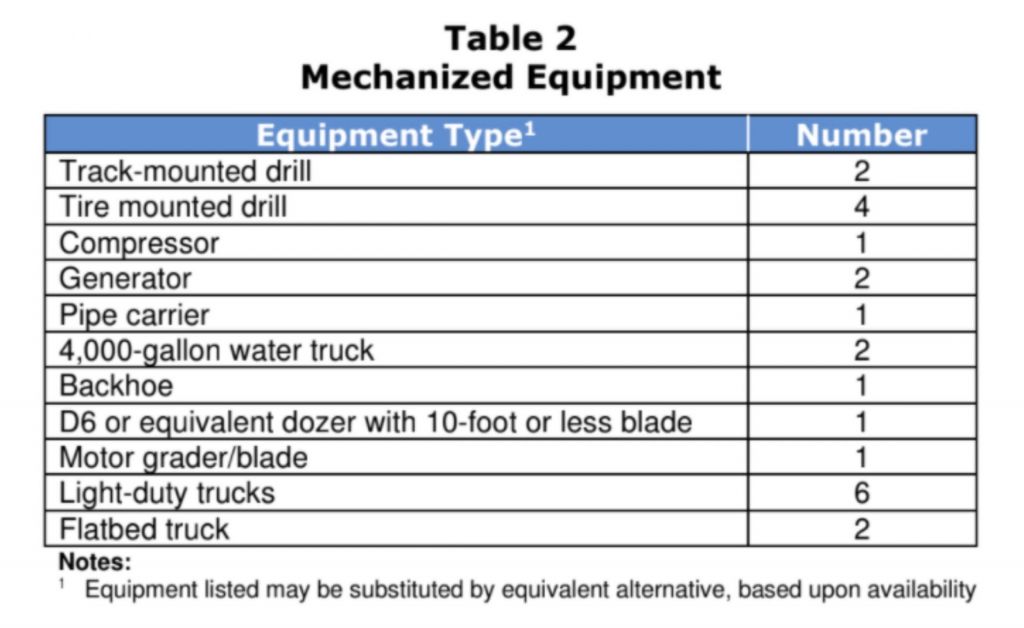 Let’s not mince words. This project should be outright denied by the Ridgecrest BLM. This is the wrong type of mining in the wrong location. But we grapple with the reality that the antiquated 1872 Mining Law reserves the right to allow for some type of exploration. We (and the BLM) must ask ourselves two questions: By what means should K2 Gold be allowed to explore and to what extent? If this project is to move forward, the Ridgecrest BLM must limit K2 Gold and Mojave Precious Metals to helicopter-access-only exploration and fewer drill holes. If history is any indicator, in 2017, SSR Mining proposed to build a road in the exact same location as K2 Gold and was denied this type of access by the Ridgecrest BLM. Exploration was only permitted by helicopter access and Inyo County supported the helicopter access alternative. Ridgecrest BLM has established a record of decision and must stand by this.

Friends of the Inyo and the Conglomerate Mesa Coalition are urging the Ridgecrest BLM and Department of Interior to initiate a public scoping comment period for this work before issuing any Draft Environmental Impact Statement (EIS) or Environmental Assessment (EA). If the Ridgecrest BLM initiates scoping, we estimate this will happen in late May or early June. Scoping would be followed by a draft EIS/EA that will likely follow in the early Fall. 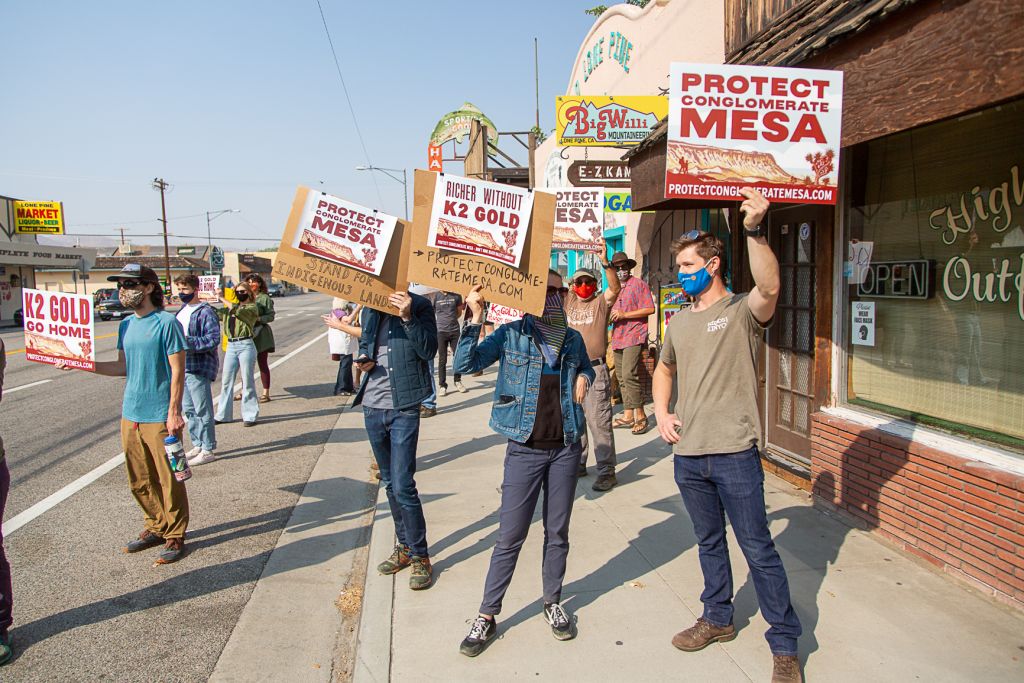 We are in this fight for the long haul. Conglomerate Mesa is a roadless wilderness-like area that has experienced little-to-no industrial impact. Other than the small-scale, mule-based charcoal production of the mid-1800s, the only industrial impact to this landscape was BHP in the late 90s; all impacts have been reclaimed. With only the most minor of exceptions, this landscape is as it was before the arrival of Europeans. We can’t let K2 Gold and Mojave Precious Metals change that.

Be prepared to make public comments. Friends of the Inyo will circulate all information related to public scoping comment periods and subsequent environmental analysis.

I am against K2 and Mojave Precious metals exploring in the Conglomerate Mesa area. Any exploration must be done via helicopter only. This is in keeping with past decisions by the BLM.

Ready, willing and able to protest this abomination.

I cannot think of any reason good enough to destroy the remaining environments we have all benefitted from, reflecting so much history in topography and geography and the people who occupied or crossed these spaces. At some point we must draw lines not to be crossed for the sake of future generations…..life is soaring into a future where technology rules, where sights, smells, textures offered by the earth which supports us are at great risk of disappearing….for what purpose. Words escape what I want to say, I just know this would be tragic if anything more than helicopter access were granted and truthfully, I prefer no scoping or intervention is granted….ever!

Long Live Conglomerate Mesa! Out with K2, literally the modern extension of colonialism that stole the Nüümü, Kawiisu, Timbisha, and Tubatulabal homelands.

30 X 30 YES!!! If we’re taking climate change and man’s encroachment on wild animal and plant species seriously, why would we allow K2gold to tear into the Mesa? In their wake they would destroy precious habitat, contaminate the water, air & terrain, thus polluting the natural resources and destroying precious lives…Why wait saving this pristine land!?