How Can We Love a Place? 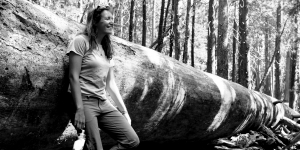 Check out Trail Ambassador Astra’s intellectual exploration of connecting to a place:

While leading my third “Wild Harvest” interpretive hike for FOI this summer, one of the participants mused about what’s underfoot. We were three-quarters of a mile up the Parker Bench Trail, pausing in the ecotone between sage steppe and forest riparian corridor. The group had just come to a stand of aspen, and we were discussing the interconnectedness of trees: how a web of fungi in the soil allows trees across species to share nutrients and knowledge amongst themselves for the betterment of the forest writ large.

“There’s something about knowing the names of these trees and how they communicate underground,” the hiker said, watching the aspens’ round, green leaves quake in the breeze blown in from a thunderhead above. “It just makes me feel like I’m connected to them, too.”

The question of interconnectedness is, perhaps, the most basic query one can hope to answer while guiding any trip into the outdoors. My goal for each interpretive hike boils down to one question: How can I make this group love this place? How do I make a stranger privy to feeling love for the pines when I think of their resource sharing; feeling love for the mule deer’s lopsided antlers; to feeling so much love I sometimes feel inclined to drop to my knees in awe of the larkspur, paintbrush, tiger lily, and columbine all twinkling in harmony under the glow of a Sierra Wave when I’m up high and the sun is setting?

Can this sort of love be shared just by offering a name? On this same interpretive hike, we turned a switchback into a sloped meadow where a seasonal creek trickled down — and as we turned, a young buck raised it’s head to meet our gaze. As we cooled in quaking aspen’s shade and identified the medicinal qualities of the plants below, the one-point deer, whose left antler was three inches shorter than its right, stayed and watched, occasionally browsing or swatting its ear at a passing bug. But mostly, it watched us watching him.

We wrapped up the hike; the buck remained just a few yards upslope. I urged the group to turn back and count the plants they could recall on their way down. But a woman from Southern California was hesitant, still transfixed by our young companion. Finally, she said to the deer, “I have to name you before I can leave you here.” She went with Buck.

In conservation and land management, there is another host of names that bears weight, too: names like wilderness, recreational zone, designated OHV trail, range, or monument. These terms prescribe a certain sort of Being onto a landscape: the way that we use a place, in many ways, can determine what sorts of connections can flourish there.

And then there are the nameless “edge-lands.” Edge-lands are areas beyond prescription; they are, as Rob Cowen puts it in his environmental narrative Common Ground, “the liminal spaces between urban and rural environments, the built-up and the agricultural, the civilized and the wild. They are those messy, transitory pieces of ground found at the limits…: the dark, mysterious land surrounding” wayward development left to become “unloved tangles” on the fringe. They are the spaces where two things previously Other (such as Urban and Rural) interact, where they synthesize as one nameless Whole.

2009 was the year, as noted by the UN, that they human population transitioned from mostly rural to mostly urban. In the 7 years since, the rural population has dropped globally to just 45% (World Bank). And the participants of my interpretive hikes, while often local and, thereby, rural, are more often than not urban-dwellers, and fully in awe of what must seem to them wholly wild. But the truth, as many of us know, is that it’s not. And what do we make of this “wild,” rural space in the half of the year when it’s full of urban folk?

Increasingly, the Inyo — both its wide valleys and sky-scraping peaks — seems to me to be a sort of edge-land.

Following a series of cuts to the US Forest Service budget, the presence on the ground for USFS field employees on the Inyo has been much diminished. Where once our high mountains were home to legions of rangers and legendary trail workers spending long days swinging heavy tools into the waning light, such crews today are non-existent. Going on trail this summer with my worn-in trail-eyes, I can see how little work has been done to upkeep the Inyo’s trails. The perseverance of these trails is due largely to our collective riding on bootstraps: the trails exist only because they were built so well originally, decades ago, in the golden age of the Wild, Open West. There are, of course, still field staff in the various agencies we partner with — and, better yet, local civilian-stewards who tend to these places we love. But by and large, trail in and trail out, I am finding that the Inyo is re-wilding: and not in the way of Wilderness, but in the way of existing outside of the definitions we may have once prescribed to it.

And so: It is becoming an edge-land. Where once the Inyo was the intersection of water wars down low, and the largely boom-bust Tungsten mining exploits up high (and the plight of our local Paiute people in every in-between and margin), these majestic hills are increasingly becoming a messy meeting place for rural and urban, for wild and civilized. It is a landscape that we must challenge ourselves (if either we live or love here) to love in spite of itself. Even if the trail is overgrown, the mosquitos are biting, the tourists are out in full force, the aspen are yellowing and it’s only July, or if all of this in sum makes you feel wary about whether this place we love is still “Wild” in the ways we think it should be: we are obliged to love it, as it is, and as it changes.

In Tree Lines, Valerie P. Cohen and Michael P. Cohen write of tree lines and, allegorically, of ecological and human change: “What you are faced with looks remarkably like a contour map whose scale is time. Maps inside life might reveal a grasping for opportunity and a letting go. Why should this introspection frighten? What were you expecting when you began this journey? Wonder or horror, or both?”

Here’s one answer. In his preface to Common Ground, Rob Cowen offers this introspection on gaining a sense of place: “What I didn’t realize until later is that in seeking to unlock, discover and make sense of a place, I was invariably doing the same to myself. The portrait was also of me.”

And so: our sense of place is not only its name, or our self in that named space; it is our ability to exist with love, instead of fear, in relation to what we haven’t created names for, yet. And in the interstices of desert plants from the South and East, water-loving plants from the North and West, and the abundant sprinkling of plants from Farther Away, we can carve out a sense of place. We can carve out a portrait of ourselves, of our love for this place.