There’s an assumption that summer is our busy season, but in one week this past November, Friends of the Inyo’s staff illustrated how ambitious and inspiring we are at the following events:

I share this for two reasons. First of all, the foundation built by our board members, organizational members, partners, volunteers, and the public at large makes it possible for our staff to take on such an ambitious amount of work. All this great stuff happens because of all of us working together, so thank you for your support.

More importantly, it’s necessary from time to time to take a step back and appreciate what we’ve accomplished, especially in a time when our national politics are divisive and depressing, when bedrock environmental laws are under attack, when our agencies are serially underfunded, and when the existential threat that is climate change hovers over it all like a Sierra wave cloud above the Owens Valley. It’s crucial for us to step off the gerbil wheel and pause. It’s crucial for us to reflect on what we’re capable of and what we can do to improve our world when we work together and give of ourselves. So the point is, Friends of the Inyo’s staff has taken a break to reflect on what we were able to accomplish between Saturday, November 11 and Saturday, November 18. We’re thankful for all of you who helped and engaged in making our public lands better. And we look forward to all the ambitious and inspiring accomplishments we’ll achieve together going forward to care for and protect our public lands.

Thank you to all of our partners who help make such an inspiring and ambitious week happen (Winter Wildlands Alliance, Eastern Sierra Interpretive Association, Inyo National Forest, California Wilderness Coalition, Amargosa Conservancy, and the Sierra Club). Check out photos below from an exciting and inspiring week in November:

At Winter Wildlands Alliance’s Grassroots Advocacy Conference, Friends of the Inyo’s Membership and Communications Manager Ben Wickham discussed the Eastern Sierra Trail Ambassadors program, the challenges and benefits of connecting advocacy and stewardship programs, working with the 4WD community, and building relationships with agencies and partners within the outdoor recreation and hospitality industries.

The conference took place at the Clair Tapaan Lodge near Donnor Pass. Built by the Sierra Club as a winter lodge in the 1930’s, it had a historic and intimate vibe, both structurally and spiritually. 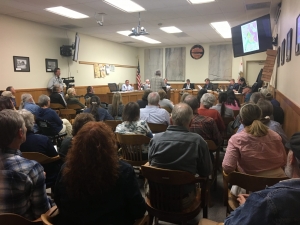 Friends of the Inyo’s Preservation Manager Jora Fogg has helped lead the local coalition of groups and locals to oppose a proposed gold mine in Conglomerate Mesa, a roadless area, place of cultural and recreational significance, and one of the most beautiful places where pinyon and Joshua tree grow at the southern end of the Inyo Mountains. At the Inyo County Board of Supervisors meeting in Independence, over 50 concerned citizens attended and 20 spoke out in opposition to the potential of such a destructive project. After hearing comments, the Board amended their letter to not support any of the alternatives that propose mining at Conglomerate Mesa. 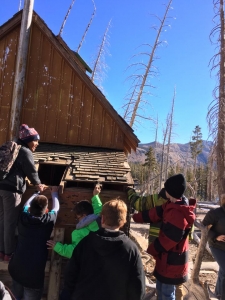 After a successful SnowSchool last winter, we decided to add field days in the fall and spring to give kids a more rounded experience. For our Fall Field Day, Friends of the Inyo’s Ben Wickham and Alex Ertaud, along with a few folks from ESIA, took 91 Mammoth Elementary students (over two days) to Horseshoe Lake in the Mammoth Lakes Basin and did water related activities with them. They built a watershed, learned more about the water cycle, explored the roles of snow surveyors, played Camouflage to learn about ecosystems, and played “Meet a Tree” to talk about how trees transition for the winter. We look forward to going out on the snow on snow shoes with them this winter to learn more about snow. 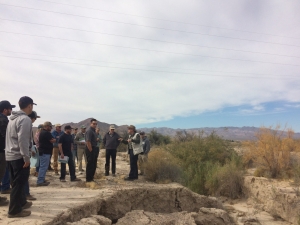 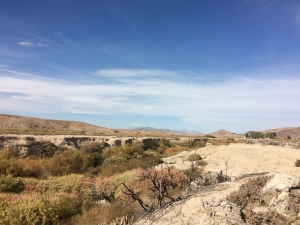 Friends of the Inyo’s Stewardship Program Manager Julia Runcie spent the week in Shoshone, a tiny village at the far eastern edge of Inyo County. There, in the heart of the Amaragosa River Basin, she attended a course in streambank soil bioengineering led by the Natural Resources Conservation Service and the Amargosa Conservancy. The course covered the basics of how rivers form and move through the landscape, and then delved into specific techniques for using plants and other natural materials to stabilize eroding streambanks. The experience culminated in a hands-on project planting willows to improve bird habitat and control erosion along the Amargosa River. With a new quiver of tools and knowledge, our Stewardship Program will be better prepared to implement best practices in riparian projects like maintaining the Owens River Water Trail. 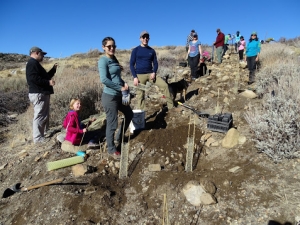 For our last stewardship event of 2017, FOI Executive Director Wendy Schneider worked with John Kelly of ESIA and Blake Engelhardt of the Inyo National Forest to engage 16 volunteers in planting bitterbrush to restore a disturbed area near Convict Lake. On a beautiful fall day, they got nearly 100 plants in the ground, and those plants will now be set up to succeed in growth beginning in the spring of 2018.